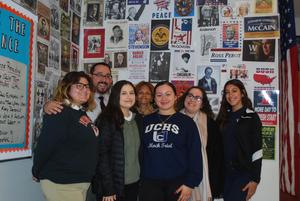 A small group of highly dedicated high school students is already showing flashes of legal brilliance – and bringing a great deal of recognition to Union City High School, our district and our community.

These students – 15 in all – are members of the Union City High School Mock Trial Team and they recently won their fifth Hudson County Championship in the last six years!

“My grandest joy is that I started this program back in the 1990’s, and it has become such a success under Mr. (Matthew) Malizia,” explains Nellie Chapman, a Vice Principal and Supervisor of Social Studies at the high school.

Mr. Malizia, who is teaching AP Government and Honors U.S. History I and II this year, took over from Ms. Chapman 15 years ago when he was teaching criminal justice at the former Career Academy.  Since then, he has mentored numerous students who have gone on to successful careers in the law and other professions.

This program, according to Ms. Chapman, is “the most intensive academic program that we offer at this level.”

Their students, who on average put in 15 to 20 hours of preparation each week, agree wholeheartedly.

Claudette Miranda, a senior who has spent four years as a team member and is this year’s team president, gives the program an unabashed recommendation. “Five Stars,” she says emphatically, adding that she intends to become a lawyer and a prosecutor.

Catherine Jacomino, also a senior, says one of the things she enjoys most is “doing all the little things to prepare for the trial so that the judges see that and know I’ve put in the work.”  She is President of the Senior Class and President of the high school’s National Honor Society chapter.

A junior, Dora Nunez has been a team member for three years and says this experience fits her perfectly.

“I’ve always known I wanted to be a lawyer, so this has been a great experience for me,” she explains.

Mikaela Querido is also a junior who says what she likes most about the team is “public speaking and preparing for a trial.  It’s just so interesting.”

Andrea Espinoza, a senior who has spent two years on the team, says initially she joined because several of her friends were members and because “Mr. Malizia taught AP Government and I just found it so interesting that I wanted to become more involved.”

Ms. Chapman says the team could never have climbed such heights without the support of the high school administration, the Board of Education and Superintendent of Schools Silvia Abbato.  She also notes that the team has been mentored for the past 15 years by local attorney Anna Norris as well as by members of the Hispanic Bar Association of New Jersey.

Team members also had the opportunity to meet with and observe Federal Judge Esther Salas, a Union City native.

Ms. Abbato congratulated all the team members and their advisors.

“These young students have made us extremely proud, as much for their hard work and dedication as for their successes,” says Ms. Abbato.  “I am certain we will hear a lot more from these students as their education and careers proceed.”